You may have heard that Jenn Carrillo was ticketed for illegal parking yesterday for (as she claims) trying to protect Black Lives Matter demonstrators at the County jail. 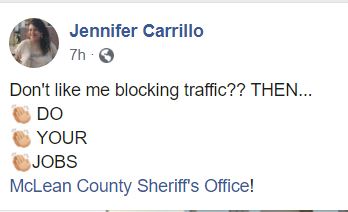 How can the police protect protesters wanting criminals and suspects released from jail when their budgets get cut?

Pick one Jenn – Both won’t work

Carrillo’s assistant radical on the City Council and State Farm corporate lawyer chimed in on the post:

It appears Jenn wants the police out so she can make her own laws.

Jenn claims in the same story the Bloomington Police showed up and protected the group.  (Maybe they were really taking pics Jenn)