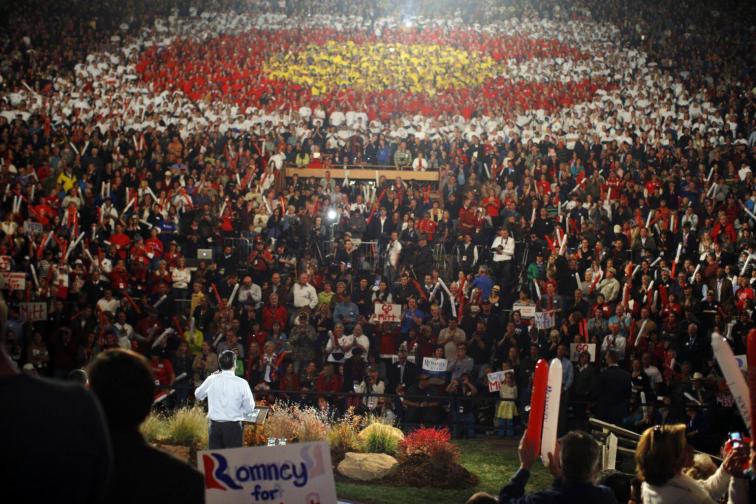 Got this feedback earlier today and thought you’d like to hear it.  You know, I’ve gone from just trying to defeat Obama to really trying to help Governor Romney be this country’s next president.  I’m really starting to believe there might be something very special about this man.  This took place out in Colorado.  Just a couple days ago.  Probably my favorite campaign trail story that’s come back my way so far this election.  Wish I had been there.  I’m going to try and get a little poetic on you here.  Hope I pull it off OK and do this story justice.  Feel free to help me out a bit in the telling.  I would be embarrassed for people to know just how bad my spelling really is.  And sadly, that’s not a joke.  -INSIDER

As the governor was en route to the amphitheater they were told the crowd was showing “strong numbers”.  What greeted him was a lot more than just “strong numbers” though.  It was a massive wave of thousands and thousands of supporters.  Before going on the governor apparently peeked out a few times and was shaking his head in disbelief at just how many people were there to see him.  He was told by organizers up to a thousand more were turned away because there simply wasn’t any room left.  People said you could feel the size of the crowd under your feet backstage.  Somebody had passed out a ton of “ thunder-sticks” and the people were banging them together and making this amazing rumbling noise.  There were some real veteran campaigners backstage and I’m told they were all blown away by this crowd in Colorado.  It really was like some big time rock show.  Just a huge response for the governor.

So Governor Romney goes onstage and gives his speech.  The crowd just totally embraces him.  From beginning to end.  Every word.  They are fired up. Loud.  Positive.  Cheering.  Just an amazing moment for the campaign.  Everybody backstage were all smiles and peeking out at all those people and shaking their heads.  This is the kind of moment in a campaign you never forget.  Ever.   Nobody who hasn’t experienced it can really understand this feeling.  You’re looking at a candidate being transformed right in front of your eyes into the next Leader of the Free World.  They go from being human into something just a bit more. It’s all those people.  That energy.  It kind of fills the candidate up and makes them bigger than life.  And you are watching it happen in real time.  Right then.

The governor returns backstage and he is smiling and shaking hands, taking congratulations from everybody around him.  He’s saying how great it was.  Somebody yells out he’s going to win Colorado and the governor laughs and says he thinks so too.  And then something very interesting happens.  He moves away from the group of people just a bit.  Maybe ten or fifteen feet or so.  Just enough to have a little space to himself.  And enough people notice that the area gets a lot more quiet, and they are trying to watch the governor without looking like they are watching the governor.  They can all kind of tell something is happening right then.  It was described as something very peaceful and powerful that came over that backstage area for a moment.  And the governor, he lowers his head and his eyes shut tight and you could see him take a slow deep breath and then he lets it out and says quietly, but just loud enough for some to hear, “Lord, if this is your will, please help to make me worthy.  Please give me the strength Lord.”  And then his eyes open up, and he’s back to smiling and laughing and shaking hands and being the candidate once again.

I’m 100% convinced Mitt Romney was shaken to his soul right then and there.  I think at that moment it was sinking in he might really be the next American president, and it humbled him right to his core, in every nerve of his body.  And as he was saying that little prayer, you could hear the sound of thunder from all those thunder-sticks outside. Like this huge low rumble that just surrounded all of them at once.  A quiet little prayer, and the sound of thunder.

The sound of God.