Thanks so much for the contributions!  My computer broke, now I can get it fixed.  It was a bad day yesterday made better by people who want information and are willing to stand up to the local abusive government.  For now I’m using an ancient laptop.

It wasn’t a surprise that Alderman Sage voted against the expanded Public Comment policy.  I was at the Bloomington City Council meeting last night for Public Comment, the Edgar County Watchdogs were back.

Most of the Council might have learned a lesson about looking at the speaker and pretending to be interested in what they say.  All members began Public Comment appearing to be attentive.  David Sage however soon lost interest.  I only took the pic below after he failed to even look up for more than a few minutes.  Sorry for the quality, I was in the back of the room.  Thanks for being a public servant David, let us know when you start. 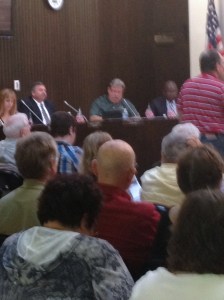