Both Bloomington and Normal hesitate to raise property tax rates because citizens will notice.  They can keep the rate level and collect more just by increasing  the assessed value of your home.   Illinois has the highest property taxes in the country, if the cities cared their rates would decrease every year because you will be charged more anyway when the value increases.

Both cities have a hotel/motel tax so they can say visitors pay it.

Both cities also have a Food/Beverage Tax.  From Normal’s website:  http://il-normal.civicplus.com/index.aspx?nid=129

Does the new 1% tax apply to grocery and vehicles?  I don’t think so, but their website doesn’t make that clear. 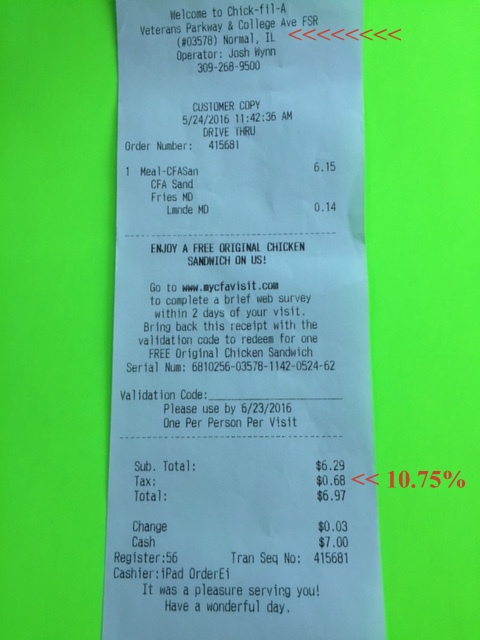 A reader recently visited California.  Businesses and citizens are fleeing that State because of high taxes.  Maybe this explains why people are fleeing Illinois too:

I can hear the mayor saying now that visitors pay much of the tax.  Untrue.  Since local restaurants are frequently jammed, it isn’t visitors contributing to bloated budgets.  It’s you.

Instead of higher property taxes where you can easily see the change, you are fleeced a little at a time.

Almost 11% of every dollar you spend eating out goes to government.

What does that tell you?

8 thoughts on “Fleecing where you don’t notice”