The Pantagraph reported around 50 people showed up yesterday for Tari’s big announcement.  I hear 25 of them were media.  If you can read the Pantagraph on-line, the comments aren’t promising for his 2nd run:  http://www.pantagraph.com/news/local/government-and-politics/elections/renner-touts-city-progress-wants-nd-term/article_512365c5-7492-5c1f-b834-e6b3fb38c2f5.html

Tari claimed he stabilized Bloomington’s finances.  I thought David Hales did that in 2008 and 2009 when the large layoffs took place.  (pre-Tari)  If Tari’s idea of stabilizing government means massive tax increases and spending – he succeeded!

It wouldn’t be a Tari speech if the truth wasn’t s-t-r-e-t-c-h-e-d.  He claimed Bloomington had a transparency score of “F” when he became Mayor.  According to the Illinois Policy Institute who is responsible for grading local governments, Bloomington had a “D” in 2011:  (Pre-Tari) 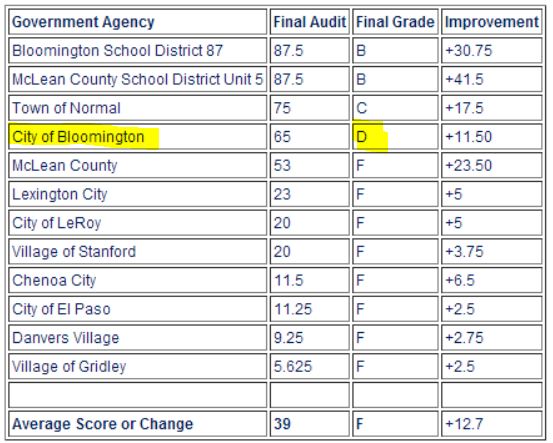 There is a bigger problem than lies.  Tari gets upset when all that transparency allows citizens to find information they could never find before.  Exposing government is WHY transparency is needed.  Quit getting upset Tari when people actually use the info!

Tari fails to realize the fastest way to turn around an economy is to let people spend their own money where they want to spend it.  We’ve seen Tari’s plans – subsidizing some while competition goes out of business, stealing business from Normal, and government’s version of Quality of Life.

Think it was smart to elect a college professor?

(Did you notice the Pantagraph didn’t fact check?)