At last Monday’s meeting Mayor Tari Renner mentioned for the thousandth time the City of Bloomington is down 100 employees.  He claims they are doing more with fewer employees.

He never mentions that possibly Bloomington at one time had too many employees and couldn’t afford them!

I compiled the below from what the City submits to the Comptroller.   The Comptroller does not fact check this, but the report should come from the audited financial statements.

2005 is just where I started, I could have gone back further.

I compiled the table from the data submitted by Bloomington.  Each year has a page with the number of employees and Appropriation.   I did not include any data under Appropriation for the library, zoo, etc.  The number strictly says:  City of Bloomington.  I do not know where these numbers came from and I’m not going to take the time to figure it out.

It looks like the real truth is in 2007 and 2008 Bloomington had too many employees.

Tari needs to quit saying Bloomington is down 100 employees.  The truth is they couldn’t afford 690 full time employees years ago.  Now they can’t afford more because spending is going up much faster than inflation.  It looks like they keep trying though. 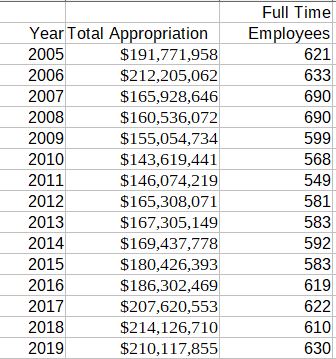