Also received under the Freedom of Information act: 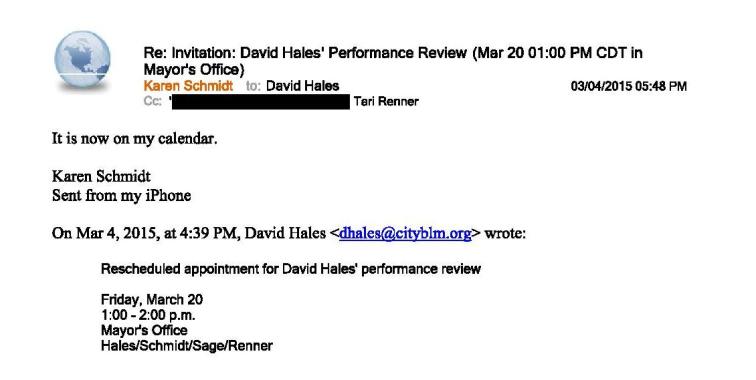 So it looks like Hales, Schmidt, Sage, and Renner met to plan David Hales Performance Review.

Sage slobbers on Hales at Council meetings – watch the videos.

Renner made it clear at the Secret meeting resulting in Judy Stearns Open Meetings Act filing that public opposition to Hales will not be tolerated. (https://blnnews.com/2014/06/04/absolute-proof-judy-stearns-was-right/)

Schmidt wanted to ban any aldermen who didn’t turn in a survey on Hales from evaluating him.  (https://blnnews.com/2015/03/27/inside-the-heads-of-potted-plants/)

But this is how the citizens business is conducted in Bloomington.  Everything is in secret, prearranged behind closed doors and taxpayer-funded lunches.

Hales was due for a review in January, but it got sidetracked by discrimination claims against a police officer, Renner’s vile comments on my site, and the budget – not to mention an election.

Last year, with benefits, Hales earned $229,655.  Soon we will know if his worshipers think that’s enough.

7 thoughts on “Will Hales get another raise?”