Update:  Right after I posted this story I was contacted by Carl Olson at the airport.  Hopefully he can answer my question.

I’m sure I was the last person they expected, but everyone was more than cordial.  Chairman Colee had copies of the packet made for me since nothing was available in advance on-line(agendas, minutes, etc). The airport manager reported they were building a new website since the current one can’t support posting the information required under Illinois Law.  They actually thought they were exempt, until I filed with the Attorney General.

(Complying with the law doesn’t require a new website.  Just add a link to an external site strictly for posting PDF links.  It doesn’t have to be fancy.)

Included in the packet were minutes from the last meeting, here’s some highlights:

I guess we should thank the Federal Government:

I wonder WHERE it’s on display? FOIA filed:

On the Agenda was approving a new lease for farming the airport property – 700 acres. They also hired a guy from ISU to manage “mapping” the soil. Luckily I have farmers in the family. They think the airport is making more per acre ($322) than it’s worth because of the soil conditions. The same guy that held the lease in previous years was the high bidder, so he knew what he was signing.  Interesting discussion though.

Chairman Colee was supposed to get me an answer to one questions, so far nothing.  See below.

Expenses run between $300,000 and $400,000 a month.  Cash on hand is $2,856,044 – at least a 7 month reserve.  But the airport is sitting on $9.3 MILLION dollars with NO long-term debt.  Fund Balances followed, the Investments number didn’t appear in any fund including the Capital Fund.  Why are they sitting on that much money?  I still have no clue.  I’m also surprised that NO Long Term Debt appears anywhere. 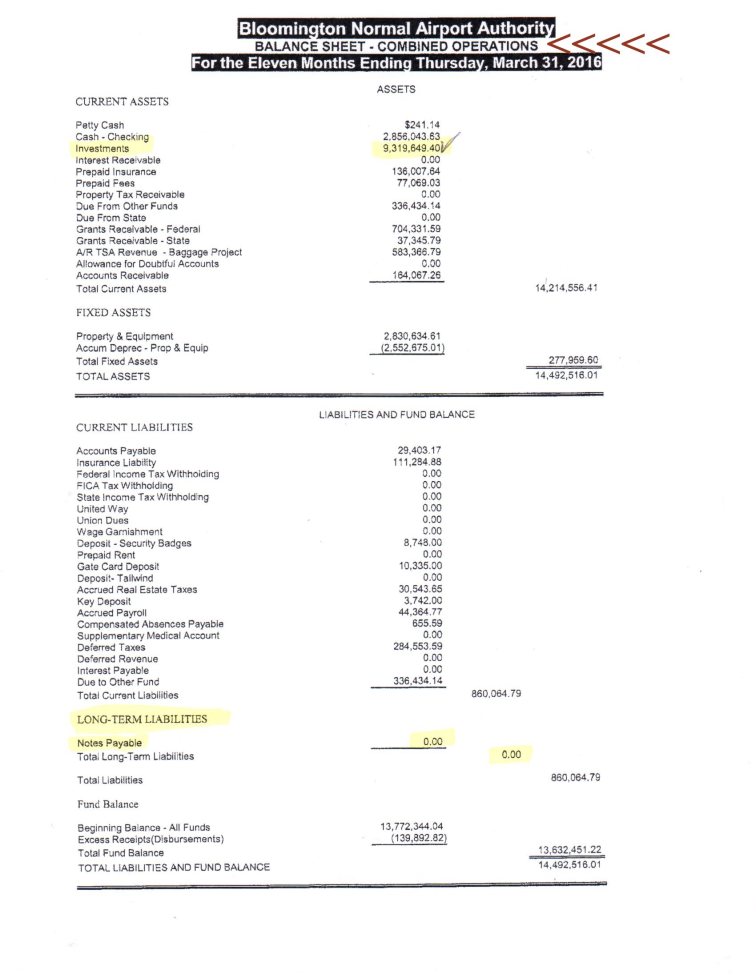 Concessions will soon be available after passengers go through security.  Tailwind Concessions is expanding to the second floor.