Local attorney Chris Gramm was fed up with Renner citing the reading of Green Eggs and Ham to the local media as a reason to change the Public Comment policy.  Chris did read it years ago as a protest to Renner’s pending tax increases.  Chris delayed the theft vote for 3 minutes, Renner does hold grudges against his opposition!  Last night Chris read parts of Renner’s vile comments on this site, the ones that led to his censure.   He then urged Renner to quit attacking private citizens in the media to justify limiting free speech.

See the video below at 7:45.  Since Chris didn’t read the entire Tari comment, so here it is: 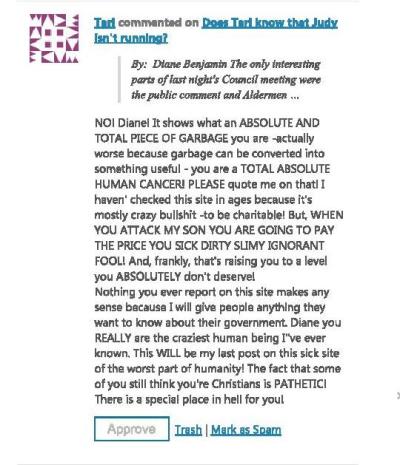 Bloomington has a classy mayor!

Pulling out of Metrozone last night was not Renner’s idea, even though he claimed to have been talking to Normal’s mayor Chris Koos for two years about it.  See page 149 of the packet for last night:  http://www.cityblm.org/Home/ShowDocument?id=12218

This effort was led by Alderman David Sage and supported by Aldermen Karen Schmidt, Joni Painter, Mboka Mwilambe, and Kevin Lower.  The Council vote was 7-2 with Diana Hauman and Jim Fruin voting no.  It isn’t Bloomington’s fault that Normal’s development in the zone has failed.  The majority of the tax income comes from properties located in Bloomington, after 30 years Bloomington residents deserve the revenue.  Maybe this will spur Normal into action.  No Normal, – a soccer field isn’t going to help much if you own the property and therefore don’t pay property taxes.

Don’t miss Scott Black calling BlnNews Fake News!  See 37:25.  He was referring to this story stating Bloomington is in the top 10 of the most dangerous places at night in Illinois:  https://blnnews.com/2016/12/27/bloomington-2-thats-not-good/

Black must have figured out he is wrong.

Before you get too worked up, look at the actual numbers.  Many of the statistics are so small that an increase of 5 incidents make the percentages look really bad.  Crime is a constant battle, Chief Heffner is fighting that battle.

Sonny Garcia will still be on the ballot even though he isn’t eligible to serve.  Garcia wouldn’t have run if he was happy with Scott Black’s representation.  Ward 7 can vote for Garcia and take their chances that the next mayor will appoint a better representative to the seat.

Black hasn’t done much for you except vote for every tax increase.  You deserve better.