Did Tari Know a large crowd was coming?  It matters.

The Bloomington Police Department was told loud and clear last night they were a huge problem.  I wonder how many officers today are questioning why they are willing to die on the job to protect and serve people who despise them.  I long line of public commentors made clear they think the police are racists bigots who scare kids.

I guess nobody noticed the meeting was illegal. 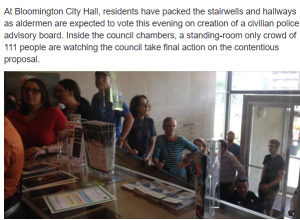 Conducting the meeting in a room that could not accommodate all members of the public who wanted to attend means the meeting was NOT open to the public.

Of course, nobody will care or prosecute – laws are even more immaterial now in Bloomington.

Will the police refuse to protect people who don’t want their help, even subconsciously?  How long before Bloomington has neighborhoods too dangerous to enter – just like Chicago?

Two officers spoke before the vote – hit play below to hear one of them.  The other one was right before him.  Next forward to 53:30.  Under Roberts Rules of Order the person running the meeting isn’t allowed to bloviate in an attempt to sway opinions.  Tari Renner doesn’t follow the rules.

You need to hear Alderman Hauman’s comments at 54:44.  She was the only NO vote.  She was offended by comments made against the police during Public Comment.   She even called them out by name – like Mike Matejka.

I have no idea why people were celebrating, the review board has no power and will only hear complaints after they are filed using the existing procedures.  We were told people are too scared to use those procedures, so really nothing has changed.

The police haters believe whatever they were told.  The only changes following this Council vote is costing taxpayers money with staff time creating and distributing materials in multiple languages and training the eventual board members.  If they do hear any complaints, nobody will ever know the details – that’s a secret.

If you see a Bloomington officer today, thank him/her for their service.

22 thoughts on “Bloomington is Chicago”