The majority of the meeting was spent talking about TIF districts.  The City of Bloomington currently has two:  Empire Corridor which is a massive area along Empire street, and Downtown Southwest.  The City is trying to get approval from the other taxing bodies for two more:  The old Junior High building area on Washington and one for the North Main property area the City has been sitting on.

I’ve explained TIF’s many times, but ask if you still don’t understand them.

The discussion went on for over an hour and included the lawyer handling TIF’s for Bloomington.  The discussion complete with numerous pics begins at 1:04:49.

Dr. Barry Reilly got pretty funny.  He claimed District 87 is doing everything they can to save money because finances are tight.  He wants the City to use other incentives for economic development instead of TIF’s.  He must have forgotten Marc Tiritilli wanted to save them $50,000 and got fired for it.  See his comments at 1:48:30.

Another amusing moment was when this slide was shown of the last downtown TIF: 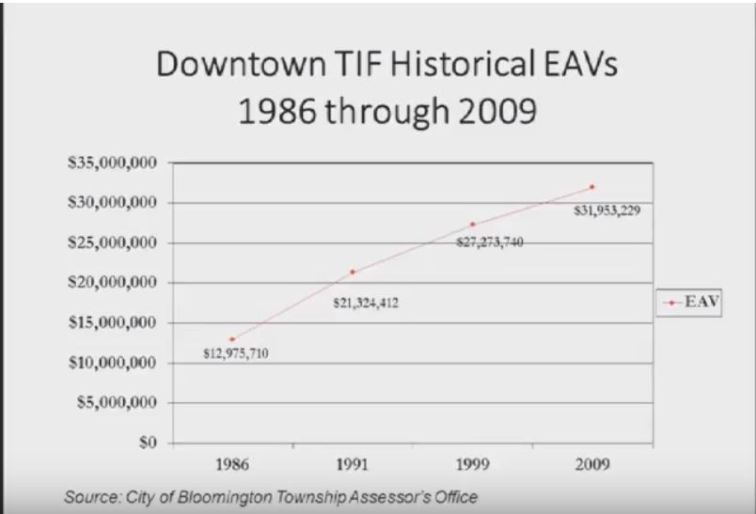 Instead of using the REAL numbers the City reported to the State, they used inflated numbers they claim came from the Township Assessor’s Office.

As I asked yesterday, how much of this increase has disappeared along with the exodus of businesses from downtown?

Mike Matejka spoke during public comment.  He urged the Council to require use of local labor for any incentives given to developers because of TIF districts.  He wants a “project labor agreement” included meaning he probably wants to require prevailing wages paid too.  Matejka fails to realize unions in Illinois have priced themselves out of the market while demanding to be protected by government (in exchange for campaign contributions).  See his comments at 35:57.

The TIF discussion will be continued in June at a Committee of the Whole meeting.

The chairman of the Police Safety and Community Relations Board also presented what the new Board has been up to.  They have received no complains yet, but they have created documents for the community on how to file complaints and operational bylaws.  The Council approved what they created.  See his comments at 41:10