One more update:  Now David Hales is being blamed for not returning phone calls.

Aldermen Mathy and Hauman have claimed on Facebook to have talked to City staff.  Their reports conflict with the original post.  Both claim nobody at the City has been called.  Keep in mind civil servants are masters of double speak.

The City gives a lot of money to the Economic Development Council and now BN Advantage.  Where are they as the VA looks for property?

I also heard the paper doesn’t think this is news.

Keep in mind these are the same people who didn’t see any problems at the Coliseum.

A guy named Danny Leifel posted a story on Facebook last night.  Before you read it, you need to know he isn’t some nut job on Facebook:

Here is what he posted: 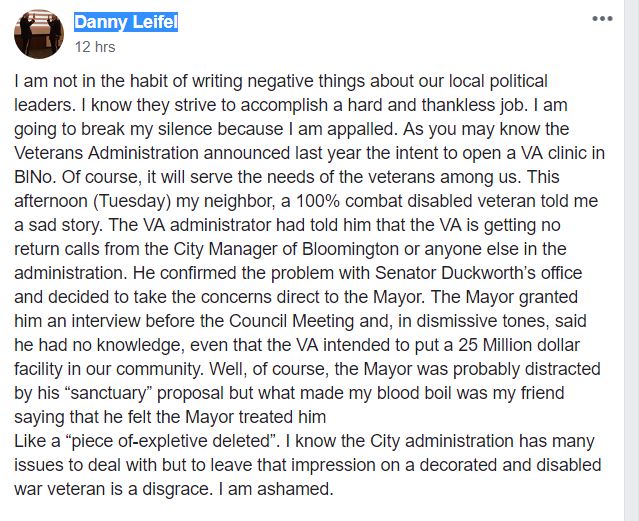 If Tari didn’t know about it, it was because he didn’t care.  I’m sure they didn’t ask for any TIF money.  The facility is supposed to open in July of 2019.

Of course this begs for another question:

How many other projects haven’t been built because City hall refused to return phone calls?

Alderman Joni Painter commented on the story.  I think she will be reaming somebody out at City Hall today.