Cuts could be easy, but nobody at the City wants to cut!

It is impossible to suggest specific budget cuts for Bloomington because the data isn’t available.  The City issued hundreds of pages saying where the money is being spent without any details.

Was there a line item last year for the purchase of an office chair for more than $1000?  No-but the City spent that much last year on ONE chair: https://blnnews.com/2017/02/24/no-free-lunches-except-for/

Look at the Bills and Payroll for next Monday night:  http://www.cityblm.org/Home/ShowDocument?id=12352

Every list includes Temp SV which mean hiring temporary help.  Normally that wouldn’t be a bad thing since taxpayers won’t be forced to pay more pensions and benefits, except the City keeps hiring new employees in addition to temporary help.  How about NO MORE Temporary Help and a hiring freeze?

Information Systems (IS) has huge payments on virtually ever Bills list.  Different suppliers are listed which makes me wonder if they have any plan for all the software.  A new website wasn’t needed – especially when the total budget in the last 4 years has increased over $40 million.  What did it cost and why was it done?  What are the future costs?  How many pieces of software have been purchased that now aren’t used?  Does all that software talk to each other so data doesn’t need entered numerous times?

The point is:  Specific cuts aren’t readily available because a line item budget doesn’t exist except at the highest levels of the City.  The aldermen weren’t provided copies of it, so what is there to talk about tomorrow?  There are hundreds if not thousands of small cuts that would amount to millions of dollars, but they are buried deep inside the budget where nobody sees them.  Every alderman should have a copy and the public should too.

Is ending pension spiking in the budget?

Is aligning the cost of health insurance with the private sector on the table?

Is cutting travel, conferences, and feeding the Council/employees on the table?

Why not institute a hiring freeze since City employees are multiplying like rabbits?

Just those 4 could provide MILLIONS in cuts.

The City budget calls for another employee in the legal department:   http://www.cityblm.org/home/showdocument?id=12224

This is the budget for salaries:  Page 87

This is the budget for benefits:  Page 90

Since the City is hiring for legal, does that mean they are going to quit sending $60-$70,000 to Springfield every month?

The line item budget sure doesn’t look like it!  Page 76

Funding for the EDC, Downtown Bloomington Association, and B/N Advantage all can be cut!  Government programs don’t create economic development!

From Bills and Payroll for Monday night:

The Coliseum is providing nothing but bills:

Of course, the media got paid: 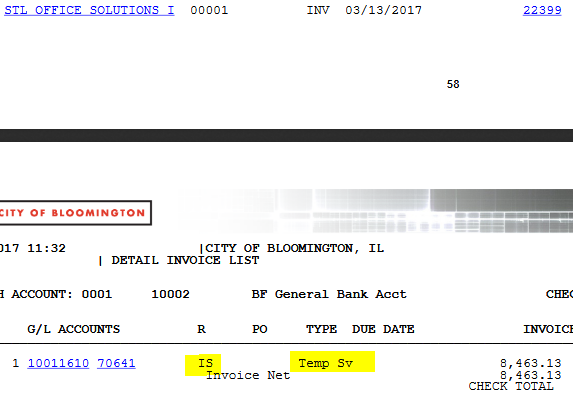 Um, let that sink in.

The City has reserves just to make to ratings agencies happy.  The Enterprise Funds – like water – are supposed to accumulate money for future projects.  Instead the City steals money from those funds to balance the budget.

Yet, tomorrow Renner will say again “The entire Parks and Recreation budget could be cut and it wouldn’t balance the budget”.

Hales will say there is nothing to cut but Police and Fire.

Since the alderman do not have a detailed line item budget – they will sit and do their best bobble-head impersonations.

Out of control spending will continue until the citizens elect people who know it’s not their money!