The Open Meetings Act is pretty simple.  It was written to keep government from hiding their actions from the people paying the bills.  This is the 1st paragraph:

Part of the OMA pertains to meeting documentation: 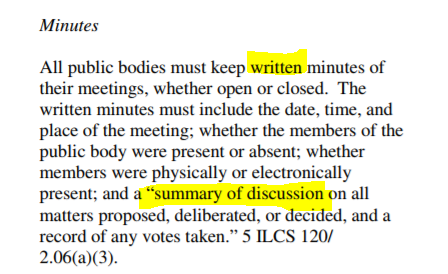 Evidently the County skipped this section, at least with the Zoning Board of Appeals.

No minutes exist for ANY of the meetings I listed.

I attended the February 7, 2017 meeting.  A lady was there taking minutes.  Why aren’t they on the website?

I don’t know.  I emailed the County’s Civil Attorney yesterday and have not received a response.

Audio is available, but that doesn’t comply with the OMA.  It also makes it very difficult to look up information.  The February meeting was carried over to the next day, so the audio is very long.  The minutes should have reflected what I was looking for or I might have been able to approximate the time – and then go to audio.

We again have an example of laws being only for use peons.

Government will never comply as long as prosecutors refuse to prosecute.  Here’s a list of what could happen:

Until it starts costing money for non-compliance, government won’t comply.

They have no shame.