Early voting is nothing more than a ploy to get people to vote before they have facts.  It takes a long time to herd people to the polls who might not be so excited about voting.  Cue the Community Bus.

Lines for voting in a Primary are never long, too many people think picking a Republican or Democrat ballot aligns them permanently with that party.  It doesn’t, primaries are for picking who you want on the ballot on November.  Sick of the same people?  Vote in the primary!

Voting in every race isn’t required.  There is no reason to vote for somebody running unopposed unless you really like him.  I can hear the political class screaming now because they think under-voting just encourages a challenger next time.  (Good!)

This morning I went to the GOP breakfast to her County Board member Scott Murphy talk about a book he wrote on term limits.  At most 40 people attended, most of them elected office holders.  Without more party support than that, the Republicans could be wiped out in November.  I think Connie Beard will do a great job recruiting ground troops.  Scott Preston (of expense reports challenges fame) needs to hang out with the liberals on the Normal Council and stay out of Republican politics.  If you want to change the GOP, change who is running it.  If you are in Dawson Township, I’m on the ballot for Precinct Committeeman:

The big races are of course for governor.

If Bruce Rauner wins the primary he will lose in November.  He has betrayed his base, they will not vote for the guy who forced us to pay for abortions and made Illinois a sanctuary state.

Biss had to drop his first pick for running mate, not because he was  member of the Democratic Socialist Party, but because of his views on Israel.  He also supported socialist Bernie Sanders.  See this story:   http://www.chicagotribune.com/news/local/politics/ct-dan-biss-ramirez-rosa-israel-met-0907-20170906-story.html

I can’t wait to see if Biss wins McLean County.  Some of his supporters are Tari Renner and Shayna Watchinski (running for County Board). 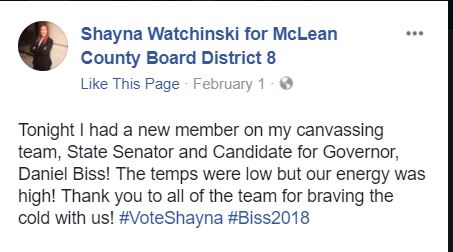 The election craziness is just getting started, don’t vote early and regret it later.