Before I answer that question, local democrats and independents need to know the local democrat party is following the same course as the national party – moving so far left it’s difficult to see them as anything but socialists veering straight toward communism

Keep in mind, Illinois People’s Action was the group that disrupted a Rodney Davis event in Uptown shouting chants demanding Medicare for All.  If you missed the video, see it here:  https://blnnews.com/2019/03/06/radicals-on-the-loose/

Illinois People’s Action are not people you can sit down and have a discussion with.  They hate America as founded and want socialism instead of freedom.

Illinois People’s Action traveled to Dwight recently to protest ICE locating a facility there.  (They lost round 1)  Since they were in favor of the Welcoming Ordinance and their goal is anarchy using illegal immigration, they are planning another trip.  This time the trip is being run out of the Democrat headquarters in downtown Bloomington – complete with a Democrat McLean County Board member modeling the merchandise they hope to raise money with:

Are local traditional Democrats supporting this?  Has your party left you?

The local Stonewall Democrats held a party last night at the Bistro in downtown Bloomington.  The Bistro has been hosting a lot of events for various candidates running for office locally.

Many of them have their name on the event (pic below): 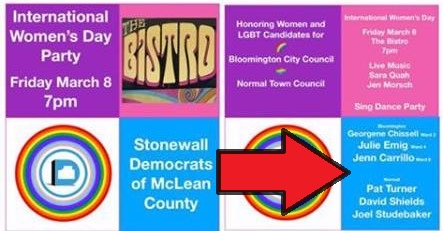 Refer back to what a Stonewall Democrat is.

Are these 6 running with an agenda to demand special rights for the LGBT community?

Most people couldn’t care less what a person’s sexual orientation is.  They do care when an agenda that violates their beliefs is crammed down their throats.

If any of these 6 gets elected we will hear endlessly about LGBT issues just like we did when Obama was in office.

BTW, the Bistro event also turned into an anti-ICE event:

These people and their supporters do vote because it is very easy to win local elections when only 10% bother to vote.

If you don’t inform and drag everyone you know to the polls, this is your future.

Everyone in this pic is running for office:

18 thoughts on “Know what a Stonewall Democrat is?”