The good news is:  Connect Transit might be out of money by 2023!

The bad news is:  Some people in town need transportation.

12 people spoke during Public Comment.  Many of them were there because Connect Transit isn’t listening to them.  Routes are being eliminated and fares may be going up.

Two Board members of Connect Transit, Ryan Whitehouse and Judy Buchanan, also spoke.  Ryan is the one who threw out the 2023 year.  Ryan also claimed April ridership was way up.  Ryan:   It could increase 10% and the buses would still be empty.

Most of the speakers want Bloomington to appoint people to the Board who actually ride the bus.  Instead Bloomington is thinking of expanding the Board so more people can be appointed.  The “intellectuals” have to stay in place.  Council member Jenn Carrillo wants to have a discussion about making the bus free.

Bloomington is giving Connect $1,237,375 this year.  Normal is giving them $75,158.33 a month ($900,000+ a year).  Both are substantially more than former years.  A bus system has existed locally since the 1970’s.  Does the financial problems in recent years have anything to do with who is running it?  (New building, remodeling, endless new buses, solar panels, etc)

Mboka Mwilambwe was appointed Mayor Pro Tem.  No one else was considered.  See 1:13:25.

Expanding the Enterprise Zone for Brandt Enterprises passed unanimously.  It was nice to see Carrillo and Crabill realize giving corporations taxes breaks creates jobs.  They did want to know how much the cost would be, nobody could answer that question.  The total affect will be impossible to calculate since including the impact of more high paying jobs won’t be measurable.  See 59:30 for the entire discussion.

The Council took 15 minutes to approve calling your representatives Council members instead of alderman.  It did include a discussion started by Kimberly Bray about how things are supposed to get on the agenda – Council Initiatives.  See 1:18:40.  Bray made it clear she doesn’t want to see those rules violated in the future.  Jenn tried to claim on Facebook this was her idea.  The conversation proves other wise: 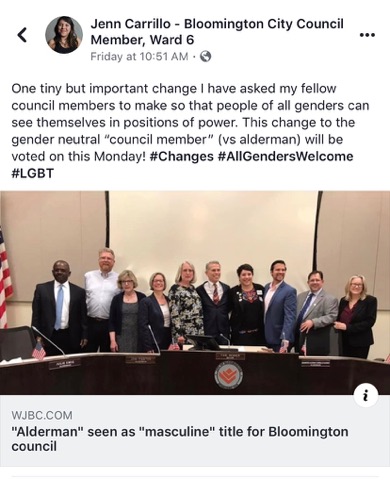 Position of Power Jenn?  Sounds like public servant has no part in what you think your job is.  Since Jenn thinks she has “power”, everyone in her Ward should ask her to fix the streets and anything else that needs it.