When government tries to control all aspects of production, marketing, and sales of any product it will fail.  The Illinois cannabis law means the black market will likely be stronger than ever.  Why would users buy from government and be taxed for the privilege?

Jenn Carrillo has a poll on her Facebook page.  I hear she sent it to supporters and not to people who would vote NO to the Council authorizing cannabis sales in Bloomington.  If you are on Facebook and want to vote, go to Jenn Carrillo – Bloomington City Council Member, Ward 6.

Why are they banning this revenue goldmine?  Because it isn’t goldmine.  The law is badly written.  State regulations will do nothing to curtail the black market, it will merely de-criminalize possession of small amounts.

See PDF page 9.  It has a list of key points in the law.  Here are my favorites:

It appears the law is subject to changes.  As written it looks like cities can’t collect taxes until September 1st even though the law goes into effect January 1st.  It seems like every organization trying to explain the law has a different take on some aspects.

Decatur mentioned they can always reconsider in the future.  Their City Manager laid out options and sample ordinances on PDF page 4.  The Council vote was 6-1 against allowing sales in the City limits.  One of the reasons given was sales would be in “cash” because it is still illegal under federal.  Cash sales not only could increase crime, it also makes accounting fraud more likely.

Carrillo wants to rush into approving sales in Bloomington even though Bloomington may not get one of the few licenses available from the State.  It appears other cities are taking a smarter approach and waiting to see how the law is put into effect.

Bloomington has a long list of “ordinance violations” they have been prosecuting themselves in their Administrative Court.  Most people would consider some items on this list criminal – not civil:  https://ecode360.com/34409209

This link describes what the City Council passed to establish their own court:  https://www.cityblm.org/home/showdocument?id=7595

This does make prosecuting easier, it also means offenders don’t have a criminal record.

I think most people believed the City’s Administrative Court was for prosecuting things like failure to mow your grass.  It isn’t.  Worse, hearings are not always held at City Hall as stated in the ordinance:

Email received by FOIA, I redacted the Defendant, the “victim” was already redacted (victim?): 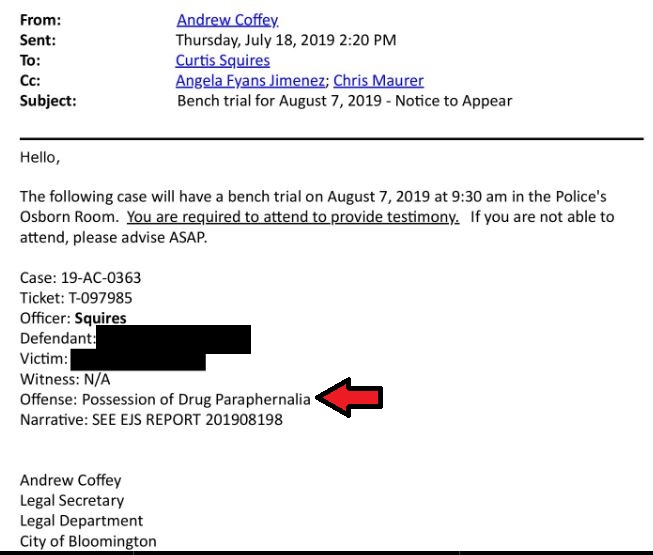 Why are bench trials held at the Police Station when the ordinance says City Hall?

Carrillo organized the first meeting of the “Task Force” for tomorrow.  She will likely try to make herself chair.  The City ordinances need changed because they talk about cannabis as a criminal activity.  Maybe the City is planning on new revenue via Administrative Court.  How many people are going to grow their own not knowing that is still illegal?  The law produces many more possible “ordinance violations”.  There’s the gold mine.

13 thoughts on “Cannabis sales no gold mine”