One bit of new information:  Connect Transit does track transfers even though they aren’t reported anywhere.  Mike McCurdy stated transfers aren’t up when he appeared at a Normal Town Council meeting, so I FOIA’d that info per month.  I got this:

This is one step closer to finding out exactly how many people ride a month – subtract the above from what Connect Transit reports since each transfer counts as two rides on their reports.

The average Connect Transit rider is charged $1 a ride.  Connect proposed raising that amount which caused fury for those who are transit dependent.

How much are Heartland and ISU paying to Connect Transit?

ISU pays a flat amount every month – this bill was received by FOIA:

Connect Transit sends ISU a monthly report on the number of users.  The number varies from month to month.  I referenced these reports previously:  https://blnnews.com/2019/04/25/connect-transit-and-isu-facts/

Heartland has a different deal.  They pay a flat amount each month and then are billed quarterly for overages.

Last year Heartland was paying .70 for each overage:

This year Heartland is paying .75. 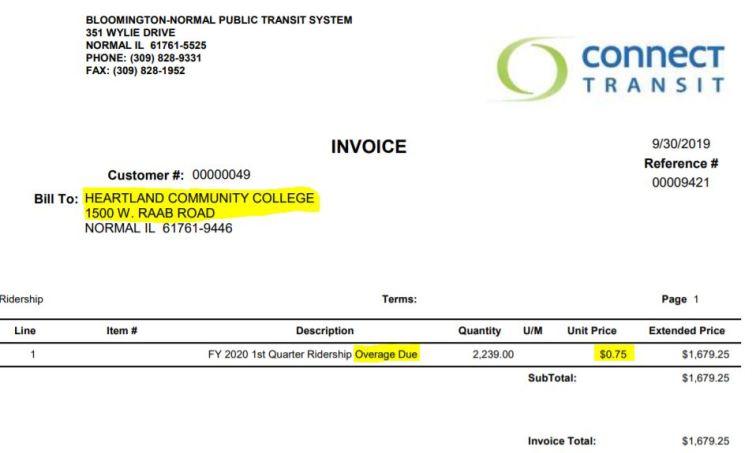 Without more FOIA requests I don’t know the rate of the flat amount they pay.  I think it is likely the same as the overage rate – .75.

At .75 each, this amounts to 9,583 rides a month.  Since the overages are billed quarterly, determining the exact number of riders per month still isn’t possible.

Why do the colleges get a discount?

Since students are a large part of total ridership, why aren’t they paying their fair share?

The Transit Dependent have to subsidize students?  Isn’t it bad enough the rest of us subsidize them too?