Steve Vogel announced in the Pantagraph today that Alderman Lower is expected to run for Mayor against Steve’s buddy, Tari.  Remember his daughter was Renner’s campaign manager twice.  Since Vogel didn’t add that to his story, I need to make sure you know the truth.

Funny, has anybody heard Alderman Lower announce he is running?  Thinking of running?  Is that the reason for the polling a month or so ago asking citizens their opinions – including how they feel about Lower and Stearns?  I wonder what happened to the results.  Anybody see a report?

Maybe the survey didn’t reveal what the guy behind it wanted to hear!  Tari?  Tari?  Was that you?

Since campaigning has already started by Renner supporters, see if this proves Tari isn’t fit to be Mayor.  Go back to the council meeting held December 15, 2014.  If you really want to have some fun, go back a little farther than where the video starts.  It recaps the solid waste fund discussion that is still going on.  This December you will hear it again!  Great management skills by your mayor!

Is Tari the only guy in town who thinks the population is growing by 1000 per year?  The way the Council keeps throwing money around and giving tax breaks to developers, most must agree.

But, what numbers did the City of Bloomington report to the State of Illinois?  All levels of government are required to submit reports to the Illinois Comptroller’s Office.  Bloomington now has three years of history on the site.  What did they report for population?

The site has even scarier numbers though.  http://tinyurl.com/IlComptroller

Didn’t Tari run for Mayor on his “conservative” credentials?

Spending $22 Million more than is taken in nullifies that argument!

Another Master Plan where Council members are told it’s just a guide.  Then months later votes are called and the Council is told they have to implement what they passed.

Have any money left for more tax increases?

Four more years of Tari, and Bloomington can be Chicago!

One more.  Compare Bloomington to Champaign (2015 not posted yet): 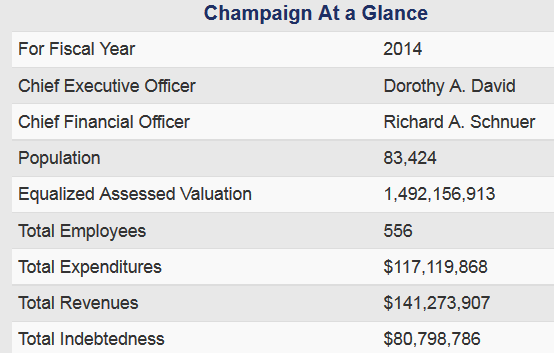 Champaign has more people, but spends a LOT less than Bloomington.

Done with Quality of Life yet?

10 thoughts on “Vogel announces Lower is running for Mayor!”