WGLT posted a story about Connect Transit a few days ago.  The author listed is a student along with Charlie Schlenker.

Connect still looking for places to build a downtown transfer station.  Isaac Thorne wants a place for 10 buses to park at the same time!  He claims the current site in front of the Law and Justice Center serves 1500 people a day.

Is that 1500 actual people, or 1500 boardings?  I’m thinking boardings since close to empty buses are still visible all over town.

1500 boardings could be as few as 375 people a day since getting off a bus and getting on another one is counted as two.  Then there is another two for the return trip.  The most people I’ve ever seen waiting for a bus is maybe 15.  Thorne wants to spend between $10 million to $14 million for their comfort.

It gets worse however.  Thorne made this claim:

Local media needs to learn that EVERYTHING uttered by anybody in government MUST be fact checked.

This claim is easy – Connect publishes financial statements every month, including the cash in their capital account: 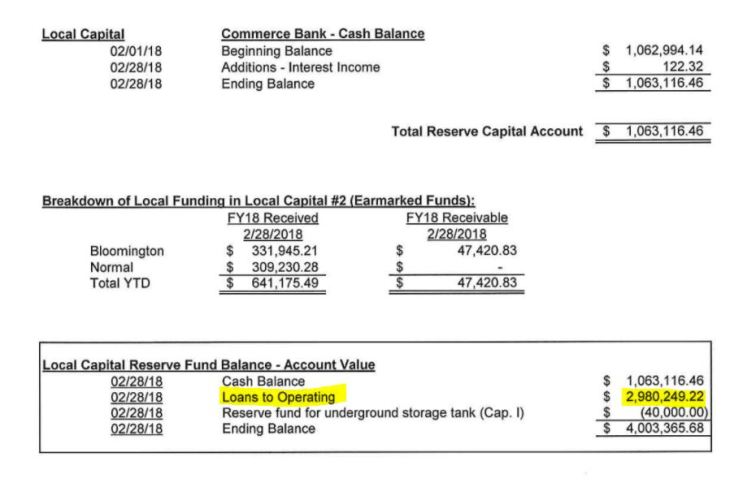 Operations is never going to generate enough money to pay back the capital account, so they have $1,000,000 in capital reserves.  (SAVINGS)

They did have the cash in February to pay back the loans:

When the March financials are posted in about a week, we will know if they used that cash to pay back the loans.  I’m thinking every cent is needed for operations, so the answer will be no.

Even if they did pay back savings, there isn’t $6 million in that fund.

The story does have some GREAT NEWS: