To the clown who is no longer allowed to post comments:  Research what the current Gas Tax is being used for.  Research where the almost what the almost $1 Trillion Obama plan for “Shovel Ready” infrastructure went.  Neither was/is spent on roads and bridges.  The Feds don’t need more money, they need to spend what they have where it is needed – not social engineering us.

These pictures are of one support beam to the Center Street bridge south of downtown Bloomington.  This is an IDOT bridge and not maintained by the City of Bloomington.

IDOT has a website where all bridges and conditions are available.  This bridge was inspected in April, it received a Sufficiency Rating of 82.4 http://apps.dot.illinois.gov/bridgesinfosystem/details.aspx?sn=0576301

Evidently it is fine to drive over.  Driving under it might be a problem – watch for falling concrete! 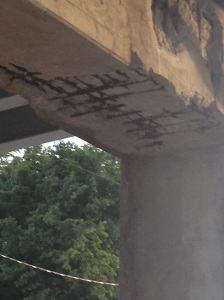