I’ve talked to some residents of Normal who don’t understand Normal’s desire for an underpass at the Amtrak station.  WJBC has a nice picture of where they want to put it – between the Amtrak station and the Children’s Discovery Museum.  http://www.wjbc.com/2017/02/06/normal-taking-next-step-toward-possible-uptown-pedestrian-underpass/

Last October Normal spent another $1.4 million to “study” the best approach.  Normal can’t decide between an overpass for around $6 million and the underpass for more than $10 million.  Source

Nobody has asked the obvious question:  Why do they need either?  This picture shows the “problem” they are trying to solve.  Two sets of tracks exist, meaning passengers can be dropped off on either side. 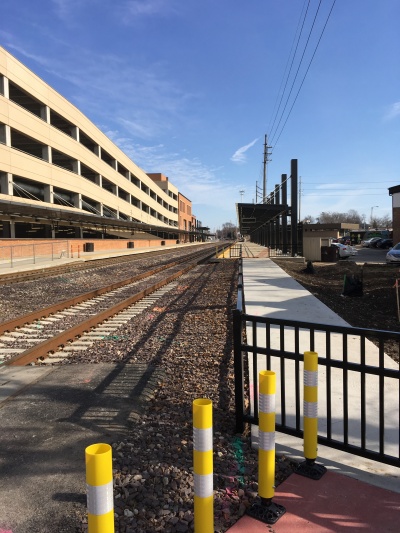 I took this pic standing on the at-grade crossing on Broadway.  Passengers currently dropped off on the south side can exit the platform south or take the sidewalk to Broadway.  It’s not very far, I thought the “new urbanism” meant walking!

Normal wants to spend MILLIONS to fix a problem that isn’t much of a problem.  Building either an overpass or an underpass creates more problems because making either ADA compliant will require elevators and the maintenance involved.  The Normal Council and Mayor need to explain why anything has to be done!

In case you didn’t know, Amtrak riders can not be dropped off in front of the station.  Cars are expected to enter the parking garage, take a parking ticket, then drive to the second floor.

The driver then exits the garage by scanning the ticket back on the main floor.  The paper ticket is now a piece of garbage.

I think this picture is the original signage:

Maybe people couldn’t see it, so now Normal has sandwich-board signs on the sidewalk:

This silly design has an easy fix. The entire lower level of the parking garage is for buses and taxes. Traffic can only enter from Broadway, there are two lanes available. Why can’t people dropping off passengers can’t use the same path? The buses I observed left mostly or completely empty, I didn’t see any taxis.

Normal claims to be environmentally friendly – this option spares a parking ticket and the wear to the parking garage driving to the second floor.

It also doesn’t make Normal look stupid for approving such a poor design!  The current design does.

Wasting your money should be a huge campaign issue.

Ask the candidates where they stand!