I found this while looking for something else and just had to add it:

Why a “legitimate” news agency would follow the loathsome people behind “Citizens Deserve better Than Kevin Lower” is beyond comprehension.  These are the same people who accused the Bloomington police of harassing them at a local park after their protest at Darin Lahood’s office.  WJBC gave them way too much time then without listening to what they said.  Their spokesperson claimed she was so upset that she pulled her car out of a parking spot, then sat nearby for another 5 minutes, then left, and then returned to find nobody there.

WOW!  She must have been scared to death!

Did WJBC notice her actions didn’t match her rhetoric?  Evidently not.

These are the same people making vulgar comments on my site, which I didn’t post, and they have attempted to harass me on Twitter.  I’m sure they will attempt to comment on this post and they will again be unsuccessful.

WJBC tried to equate the comment made by Kevin Lower in 2014, which could be taken many ways, with the comments on this site by Tari Renner which led to his censure.  He is the only mayor in the history of Bloomington ever censured!  These clowns had to troll Lower back 3 years to find something offensive only in their heads!

A racist under every rock no longer works, the Democrat party wore that one out back in 2009.  Twisting every comment made to imply somebody is a racist is the epitome of stupidity.  WJBC showed just how low they will go to defeat any candidates that aren’t far left.

The last time I posted Renner’s vulgarity, some readers were seeing it for the first time.  Since some people don’t know, I’m going to re-post it with context this time.

His comments were made to this story:  https://blnnews.com/2015/02/10/does-tari-know-that-judy-isnt-running/

Tari had recruited IWU students to attack Judy Stearns at Council.  One just happened to be the President of the campus Democrats.  Surprise Surprise.

The story had nothing to do with Tari’s sons and there never was an attack.  It was merely an excuse Tari dreamed up for his extremely offensive speech.

Below is the comment I made and then Tari’s (drug or alcohol induced?) response claiming I attacked his son: 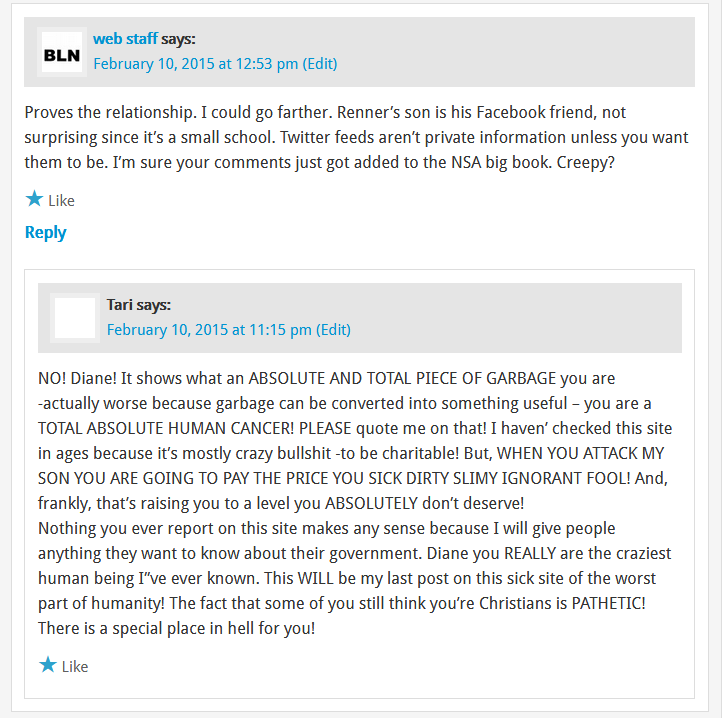 I can’t wait for the Pantagraph and the Chamber of Commerce to endorse Tari Renner for Mayor.

They will join WJBC in the ranks of media not worth listening to because their FAKE NEWS is beyond reprehensible.

The Chamber of Commerce will prove they value Tari Renner’s tax and spend policies over local businesses he is putting out of business.

Why is anybody still a member of the Chamber?

Why would anybody listen to WJBC?  Their new afternoon guy is way beyond left.  I hope his ratings tank along with ad revenue WJBC desperately needs.

Renner will probably have more outrageous tricks to play before the election.  He sure can’t win on his tax and spend policies.