I’ve been reading a TON of media stories from before and after the Bloomington City Council voted to build the Coliseum.

Judy Markowitz didn’t care what people thought.  She was going to build it and nothing was going to stop her.  She really believed she was saving downtown.  Mike Matejka and former City Manager Tom Hamilton were right there with her.  Funny how I’m not seeing quotes from the other Council members.  Arrogant is the only way to describe Judy, Mike, and Tom.  They were smarter than everybody else.  Oh, they wanted a hotel and convention center attached to the Coliseum too.

These three were so smart that at one point they had contracts signed with two different management groups.  Remember Larry Hundman’s lawsuit?  He had a signed contract and so did Central Illinois Arena Management.  After much legal expense CIAM won, we know how that turned out.  There was another lawsuit filed by citizens you may have forgotten.  They filed claiming the bidding was illegal.  They lost.

You may also have forgotten between the Coliseum and the BCPA the City was close to maxing their debt limit without a bond rating downgrade.  Hamilton claimed that much debt wasn’t a problem if they had the money to pay it back.  The stories claim Judy promised to not raise property taxes, she never said other taxes wouldn’t be raised.  Expectations were the Coliseum would pay the bonds from revenues.  Revenues never did and never will.

Government’s job isn’t to pit citizens against each other with hair-brained schemes.  It’s very clear that Markowitz and company did just that.  66% of voters told her don’t build it, she thumbed her nose at them.  She stabbed them in the back.  Her excellency declared it a done deal – end of story.

She is no different from Tari Renner and Company.  The voters of Bloomington either aren’t paying attention or enjoy being ruled by bullies.

I could print dozens and dozens of angry Letters to the Editor, here’s just a sample. 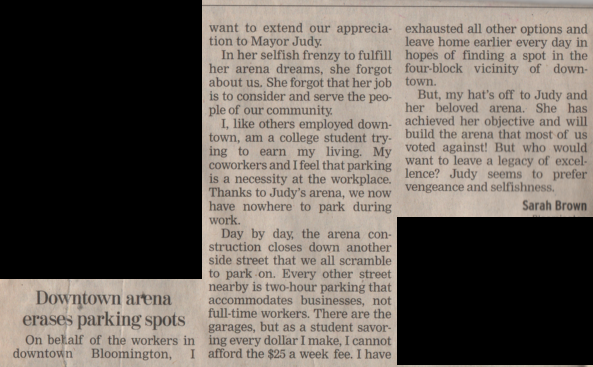 12 thoughts on “The SAD Coliseum history”