Monday night the City Council got a long report from multiple City employees on what is happening downtown this summer.

Your large garbage pickup got changed to twice a year, downtown will see garbage and recycling picked up 7 days a week.  The streets will be swept twice a week.  The Way Finding signs will be getting installed.  13 blocks will be resurfaced, Front Street is left over from last year, somehow Center Street got added to the list.  I asked Jim Karch how both made the list, he replied about Front and didn’t answer about Center.

Screen shots from the meeting video:

Downtown is getting 60 self watering flower pots.  The speaker is hard to understand, but I believe she says SIXTY – see 46:15

Did you know you are funding downtown facades?  These grants are merely named after her, she didn’t leave money to fund it:  http://www.cityblm.org/home/showdocument?id=4101 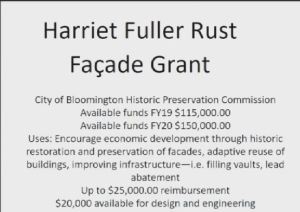 This is one of the projects you paid for last year, the business is ironically called Reality Bites.  The Historic Preservation committee approves the grants.  It is also redistribution of wealth to those government prefers.

The parking garages downtown are being automated!   I wonder what they did with the people who used to work at them?  The City must still not realize paying to park deters visitors when free parking exists at strip malls and what’s left of Eastland Mall.  Forcing people to pay to park isn’t going to bring them downtown.

If you want to hear the downtown presentation just hit Play below.  Prior to that was the first annual report from the Public Safety and Citizens Review Board.  They almost had themselves convinced they weren’t needed when nobody filed a report.  Then that one got filed, the police were found to have followed procedures, and we can’t know any details.  I believe he said only two complaints were even filed with the police the entire year.  We don’t know how much money they spent producing brochures (in English and Spanish) and distributing them.

The discussion of the local history of the circus was first.  It appears taxpayers won’t be funding the statue that will be placed at the corner of Washington and East.  The County already approved it, evidently Bloomington has to at the next meeting:

Read more on PDF page 2 of this County document:  https://www.mcleancountyil.gov/ArchiveCenter/ViewFile/Item/6510