If you needed any more proof the YWCA is one of the radical centers of McLean County: 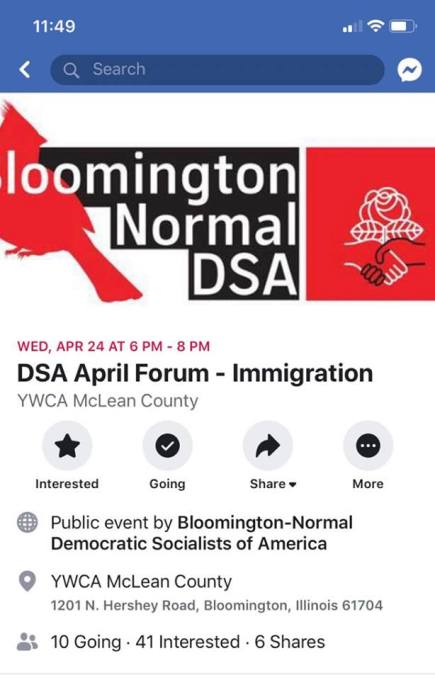 DSA is Democratic Socialists of America.

They claim democratic socialism is much different from regular old socialism.  It isn’t.  It is just the first step to becoming Cuba or Venezuela.  They convince people to vote them into power and then they refuse to go away when the people finally figure out socialism  has destroyed life, liberty, and the pursuit of happiness.  By then it’s too late.

Why would they be holding a forum to expose the plight of illegal aliens?

Obviously the Welcoming Ordinance for Bloomington will be back on the agenda.

This forum will rally the troops again to descend on City Hall and demand it gets passed.  At least some of the new Council members only ran because Bloomington hasn’t complied with their will.

Next, they will demand the County passes it too.  They can pretend this won’t make McLean County a sanctuary, but it will.  Otherwise there is no need for it since the State already changed the rules to protect illegals.

Isn’t it great to live in a State where citizens are second class?

Remember when kids were taught in school that socialism is the opposite of freedom?

14 thoughts on “Gearing up for the Welcoming Ordinance”