It looks like Kroger won’t be building on East College.  There is a sign on the property now advertising Commercial property for sale,.

The Pantagraph ran the story below using 10 years of data, not the data from last year showing the Bloomington-Normal Metro area lost population.  https://blnnews.com/2019/04/18/yep-people-are-leaving/

Say it together:  #FakeNews.  Of course democrat Carlo Robustelli had to collude with the paper.

The local elections are non-partisan in name only.  I remember some of the first words out of Tari Renner’s mouth when he was first elected were:  I’m the fist democrat ever to be elected mayor!

The citizens have been hurt by him ever since.  Just like the Illinois democrats in Springfield Tari can’t live within his means either.  The budget has come close to doubling while citizens get fewer services and taxes on everything possible have been raised.

The people elected don’t check their core beliefs are the door.  Either they are tax and spenders or fiscally conservative.  Voters deserve to know which they are!

Carlo, nobody is buying that Tari didn’t recruit “his” democrats for “his” council.  Your comments make you look ridiculous. 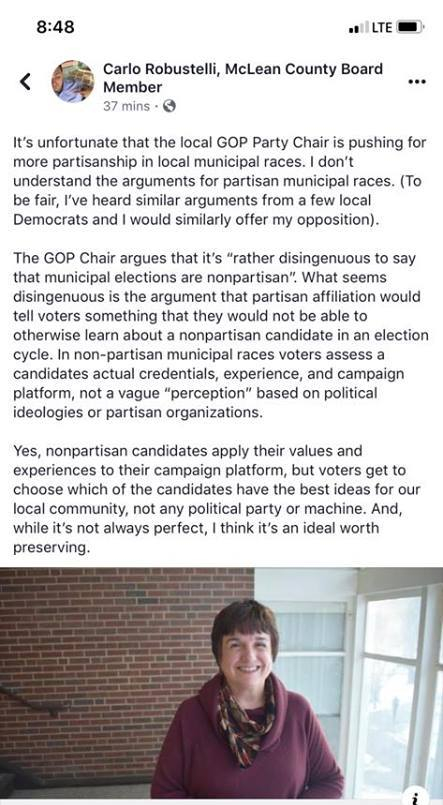 These were some of the comment’s to Carlo’s post.  Chemberly is a Normal Trustee who never leaves her ideology at home.  Tyson is wrong about Smith, Nord, and Sila.  Sila is a Libertarian, not a Republican.  Nord is an independent. not a Republican.

Chemberly and Dan obviously don’t see the obvious.  Democrats want to run your life, everybody else thinks you can run your own.  Yes, party does matter.

No, the Councils do not act in the best interests of the people.  Never ending tax and fee increases, un-drivable roads, and cuts in services while diverting money to projects government wants (but the people don’t) proves it. 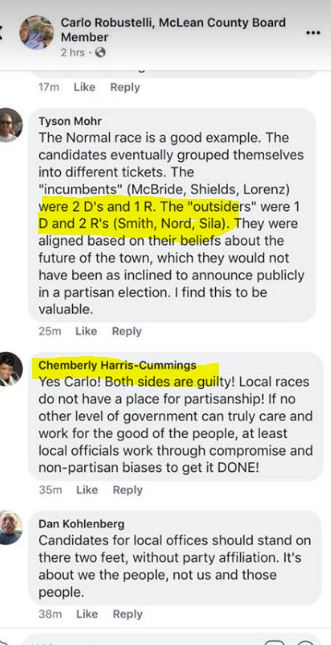 Last night was Maunday Thursday.  Holy Week used to be where being in church was expected.  Events weren’t planned so as not to offend Christians.

Last night many kids were playing soccer at the airport.

Last night the local democrats held a campaign event to talk about their accomplishments and the future.

I wonder if Erik opened with prayer?

Today is Good Friday.  I know where I will be spending part of it.  I hope you do too.

12 thoughts on “Things that don’t fit anywhere else”