It is official – Jose Rodriguez in an illegal alien.  Catch and release policies allowed him to be free in this country since 2013.  Of course he didn’t show up for his court date. 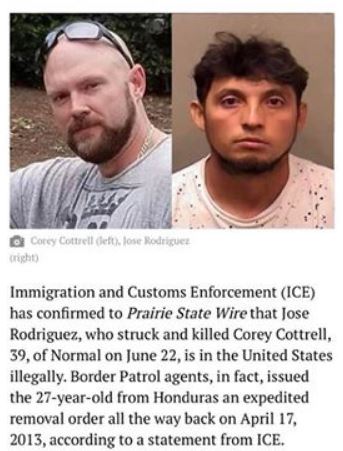 STATEMENT: (on the record from Nicole Alberico as an ICE spokesperson)
On June 23, 2019, deportation officers with U.S. Immigration and Customs Enforcement (ICE) placed an immigration detainer with McLean County (Illinois) Jail on Jose Rodriguez-Rodriguez, 26, an illegal alien from Honduras, following his criminal arrest in Bloomington, Illinois.

On April 17, 2013, U.S. Border Patrol agents (USBP) encountered Rodriguez-Rodriguez after he illegally entered the United States; they issued him an expedited removal order. On March 6, 2014, a federal immigration judge (IJ) ordered him removed in absentia; he is considered an ICE fugitive.

ON BACKGROUND (from an ICE official):
Detainers serve as a legally authorized request, upon which a law enforcement agency may rely, to continue to maintain custody of an alien for up to 48 hours so that ICE may assume custody for removal purposes. Pursuant to ICE policy, all ICE detainers are submitted with an accompanying administrative arrest warrant or warrant of removal depending upon the circumstances of the individual case. ICE places immigration detainers when the agency possesses probable cause to believe an alien is deportable from the United States. More information on ICE detainer policy can be found at the following website: https://www.ice.gov/detainer-policy

Expedited removals occur when a non-U.S. citizen is denied entry into the United States and is physically removed, usually from a U.S. port of entry. Expedited removals carry the same legal consequences as a removal (deportation).

Illinois will be flooded with illegal aliens because of the Trust Act.  Congrats Illinois!

Did he apply for DACA too?

35 thoughts on “Rodriguez had a deportation order”