I haven’t FOIA’d other school districts yet, but I’m betting this is widespread.

I was contacted weeks ago by a person who’s grandson was unable to study during STUDY HALL because the teacher always had CNN10 on instead of allowing quiet time.  This was at Kingsley Junior High.  This person has watched CNN10 and was disgusted by the constant attacks on President Trump.  The attacks weren’t as ridiculous as the CNN network, but they were obvious.

Today I sent a FOIA request ar 2:33 to Unit 5 asking for the cost, district policy for use, and what schools have CNN10.

The first response was from the FOIA officer who works in the District office:

This is the only FOIA I have ever filed and received a response almost immediately.

I was notified by the distinct attorney at 3:17 instead of the FOIA officer: 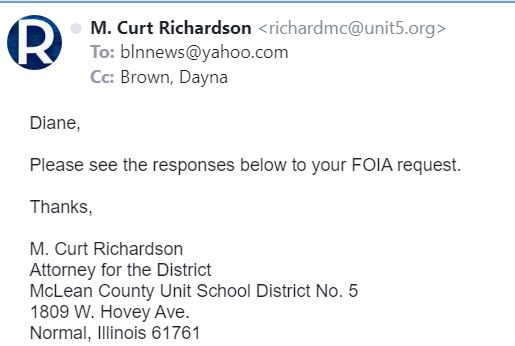 The red is Unit 5’s response:

I appreciate the lightning fast response, but the question is why is it from the district lawyer?

Of course there is no cost for CNN10!  Talking schools into paying for TV wouldn’t fly – free is the best way to sneak in indoctrination.  Is CNN trying to train kids to watch their station only in the future?  Great marketing plan since their current viewership is dismal.

Ask your kids how often they are subjected to CNN propaganda.  Contact the School Board and ask them why kids are exposed to one sided news at school.  I wonder how they will tell the “impeachment” story.  Will CNN10 say the Republicans aren’t allowed to call witnesses?

Would Unit 5 allow free Fox News in the classrooms?

For one, the public schools show them CNN!