Think you own your property?

Think back almost a year ago.  The Town of Normal tried to collect sewer tap-on fees from Stan for his property on West College.

At the time Stan made it clear the same thing could happen to any property owner in Bloomington or Normal.  He questioned why anyone would buy a local property without knowing when and if a bill would show up in their mailbox because some previous owner or developer never paid required fees.  His property did not have any liens when he bought it.  He had no idea payment to hook into the sanitary sewer were never paid or even billed.

I have been reading documents from another obscure government unit that taxes you but has little to no oversight.  They don’t have a website so it isn’t a surprise when at every meeting there is a call for Public Comment and there never is any.  Nobody knows when they meet, what they do, what they spend money on, yet they are vital to your life.

BNWRD charges you twice for service.  You are charged monthly on your water bill and on your property tax bill.

Look at both bills, if you currently are connected to the sanitary sewers system and you aren’t being charged on both – they will be coming for your money.  More on water bills in the future.

This story is about property owners in Bloomington who found themselves in the same situation as Stan did.  Instead of tap-on fees, these people weren’t charged property taxes.

This is from the minutes of a hearing held on May 13, 2019 for Annexation Non-compliance Violations: 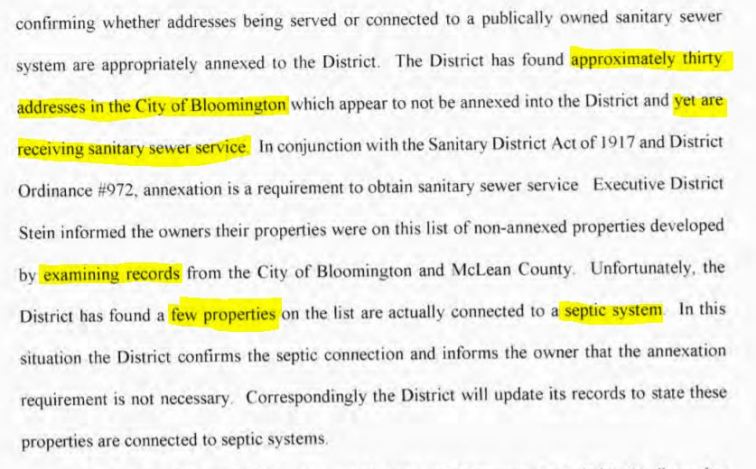 just in Bloomington BNWRD identified addresses that have never been charged on their property tax bills for being connected to the system.

Here’s where it gets just like Stan, they hauled in average “Joe” and demanded payment:

I thought a long time about whether to redact Mr. Reed’s name and address.  I opted not to because he doesn’t live in a mansion.  The taxable value of his property is only $38,155.  The house was built in 1999, property taxes weren’t accessed until 2003.  The minutes do not say how much BNWRD demanded from him but I can estimate it based on what the house next door has paid since 2003 to BNWRD.  It’s around $1000.  I don’t know if BNWRD demanded an annexation fee in addition to past property taxes, but I am going to FOIA.

This proves Stan was absolutely right.

You have no property rights when government decides somebody screwed up years or decades ago.  If fees weren’t paid by previous owners you have no right to object or even have objections heard.  There is no Statute of Limitation on government screw ups.

Mr. Reed has no recourse.  He is not going to be the only one.  You could be next.

The GIS system usually shows permits issued on properties.  Both Mr. Reeds property and the one next door don’t show any permits issued.

Stay tuned, I’ve got much more on BNWRD in the coming weeks.

22 thoughts on “What Stan warned about happened!”