35:40 – one public comment by Ron Ulmer.  His comments were on recycling and contract employees being required to wear masks

38:00 Pam Reece reviewed some items on the Omnibus Agenda.

Stan Nord pulled the bills.  The first item he questioned was $7500 to the University of Illinois for an energy audit.  The actual amount paid included another $7500 because the Town did two different buildings.  I FOIA’d the report.  You can see it here:  Normal _Energy_Assessment

The audit was completed for the Water Plant and 11 Uptown, the building that houses Town offices and Amtrak.  You can listen to Stan at 45:00

For a Town that claims to be “green” superior and pro-electric vehicles, they scored poor at best.  See PDF page 18

The majority of the problems are leaving lights on, only turning the thermostat down 5 degrees when the building is empty, and using bulbs that aren’t energy saving LED.  You can’t graduate high school with a 43 out of 100!

Ameren will be reimbursing the Town, evidently a fund is created through monthly bills.  The bottom line is Normal didn’t need an audit to tell them what most people already know.  It appears they can not make a decisions with hiring a consultant.  Watch the rest of the Council while he is talking!

The second item Stan mentioned was Sugar Creek after he received an email from a retired Normal fireman who lives by the area in question.  Again, watch the members.  48:00.  Most seem totally uninterested.  Watch Koos at 50:00 claim previous councils approved these items so they aren’t up for discussion.  The energy audit didn’t meet the threshold for Council approval, so I doubt it was ever presented.  Sugar Creek, if it ever came before Council, shows Council believes only what they are told.  I’ve got pictures!

Sugar Creek runs through both Bloomington and Normal.  It has to be kept flowing to prevent flooding.  Instead, Normal decided part of it needs to be a mosquito sanctuary.

How is should look – Fell and Hovey – note the sides are mowed leaving water free to flow:

This is how it looks near the corner of Towanda and Fort Jesse: 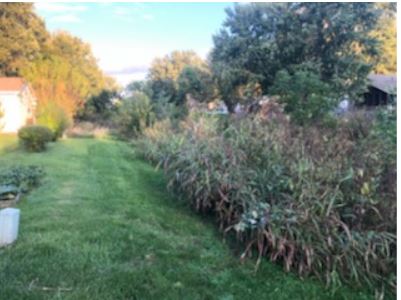 It has been growing for years, even small trees are now blocking water flow.  What is the rule about standing water?  Just like the above simple measures to reduce energy consumption, most people know standing water allows mosquitoes to multiply out of control.  They are living fat and happy in their sanctuary!

On the bills was this payment:

The total cost higher, but the Town plans to let this area re-grow for many more years after this cleaning.  Stan asked Pam Reece about this item – what is in yellow is the response he received:

Whoever told the Town this is “best practice” needs to be fired.  Mowing promotes erosion?  Is your lawn washing away because you mow it?  Mosquitoes breeding aren’t a benefit to the environment or the people living along the creek.

Since a previous Council passed the Stream Buffer Ordinance it of course can not be changed.  Koos doesn’t want it discussed unless the contract comes up again.  He also claimed the EPA demands this.  Sure mayor, that doesn’t explain why other parts are mowed!