I attended this event – Nick Adams has an amazing love for America AND Americans.  He has a non-profit call FLAG.  From their website:  http://www.flagusa.org/

Its principal purpose is to educationally proclaim the greatness of America, and ensure that the next generation of American leaders understands what it means to be an American.

Several members of Black Lives Matter attended, but didn’t disrupt the event.  Nick will be speaking again at the GOP picnic Sunday.

I emailed ISU for a comment – see the end of this story.  It didn’t come from a Administration, it also states the expected.

Nick Adams will be speaking tonight on campus.  He is an Australian who dreamed of being an American because of what America stands for.  America pierced the world’s darkness and government oppression.  America told people they were designed “by their Creator” and given rights government can’t take away.  People around the world flocked here for freedom, liberty, and opportunity their country wouldn’t give them.  America changed the world.

Our schools have “forgotten” to teach America proved that free people create prosperity.  Millions around the world have been pulled from poverty because of America.

Is ISU teaching their kids lies and hate?  These pictures were taken at Schroeder Hall LAST NIGHT: 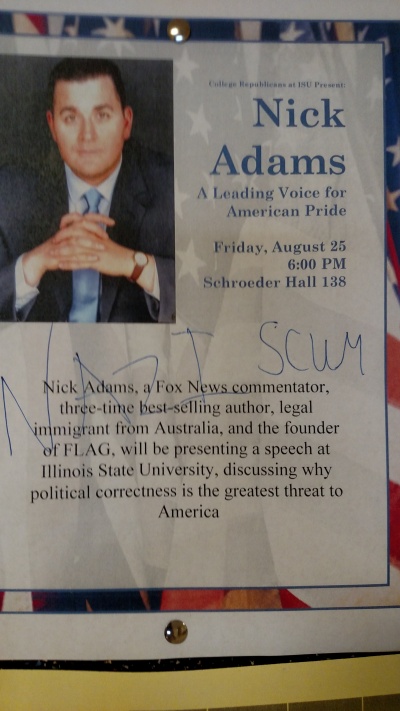 Both flyers were on bulletin boards along with other announcements and flyers.

We could just assume the person(s) who did this have a mental disease.

We could ignore the comparison of a freedom loving Ausi to Nazis responsible for the deaths of millions.

But think back to last Monday when the Town of Normal City Manager called everybody and churches racist: https://blnnews.com/2017/08/23/we-are-all-racist/

But that’s still not all.

See the description of the movie below.

This movie will further the lies told that started Black Lives Matters and the resulting shootings of police officers across the country. The Normal Police must be appalled their employer is promoting violence against them by screening this untruthful movie.

Would Normal’s Police be unable to stop the violence we saw night after night in Ferguson?  Why couldn’t their police stop it?  Were they told NOT to stop it?

Hands Up Don’t Shoot never happened. The officer who shot Michael Brown was cleared of all charges – even by Obama’s Justice Department.  Violence in Ferguson was largely committed by people bused in to create it.  Mike Brown wasn’t ‘killed” and his civil rights weren’t violated. He is dead because of HIS actions, not race, prejudice, or rights violations.

The only reason to show this movie is to keep racial strife alive.

ISU is doing nothing to stop if, the Normal City Manager thinks citizens are racists, and the Town is promoting lies.

Yes, there is good reason not to go to Normal.

Not In Our Town is of course MIA.