Last night I actually asked the people around me if they heard the same things I did.  It was close to the end when Evan Eleff of Sports Facilities Advisory stated the complex will never pay for itself.  I asked him about it after the meeting ended.  He told me this is Parks and Rec, and if we were looking for a project that covered construction costs, this isn’t it.

It seemed like half of the meeting was background information on the number of kids in organized sports declining because of the costs.  The standard obesity rates and claims active kids turn out more successful followed.  In spite of those statements, the purpose of this complex isn’t to make local sports affordable, it’s to draw tournaments and people here to spend money.

The speaker made a point of saying this could not be just for soccer.  He then listed other popular sports, but they already have facilities:  basketball, volleyball, baseball.  A few minor sports like squash and cricket could be played there too, but there are limited participants in those sports now.  What is needed is soccer fields since the FAA wants them off the airport property.

In case you missed this story, safety has nothing to do with why the kids need to relocate:   https://blnnews.com/2018/04/05/faa-cira-and-soccer/

This is the projected cost, it doesn’t include the cash needed to cover losses in the first few years:

Both mayors are likely salivating over these numbers: 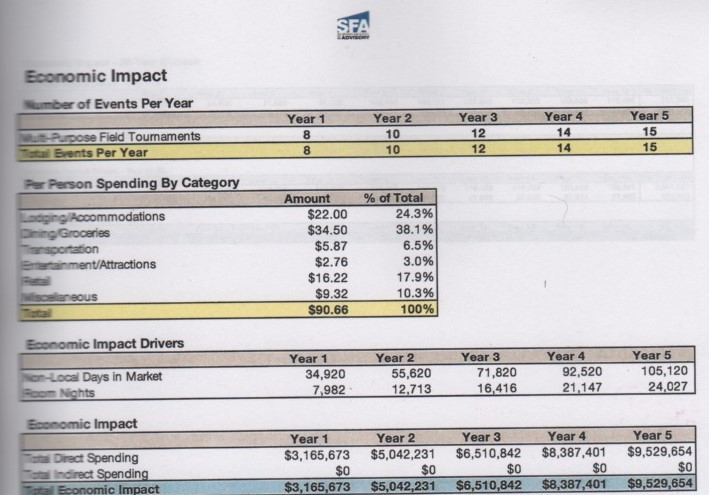 The entire presentation will eventually be on line.

Economic Impact is a fictitious number, it’s closer to redistribution of wealth.  Taxes must be raised since neither town has spare money to spend.  The economic impact on you will be negative!

The economic impact of Uptown, the Coliseum, and the BCPA have all been negative for citizens.  I can see the majority of Bloomington Alderman killing this plan, I can also see Normal proceeding anyway.  Dream big at your expense is how they have operated for more than a decade.

One thing the speaker said struck me as informative.  Bloomington-Normal has more than an adequate number of hotels and restaurants to support the tournaments that may materialize.  That means currently these are under utilized, which means who is next to go out of business?

The synthetic turf would need to be replaced about every 10 years, the dome around 20.  Maintenance costs will need more taxes.

I applaud the presenter for at least saying up front this will never pay for itself.  The consult for the Coliseum claimed it would easily cover construction costs.  Mr. Eleff did utter the magic words:  Quality of Life.  I’m sure both Councils (the members present) perked up at that one.

18 thoughts on “Sports Complex MUST be Dead on Arrival”