On December 5th I FOIA’d Unit 5 for emails referring to Standards Based Grading.  I was told it was way to many emails and they requested I narrow the request.  I did narrow the request to emails between Dan Lamboley and the consultant  Unit 5 hired – Garnet Hillman.

I also requested a list of expenses incurred with Standards Based grading – that part I have never received.  Yes, I have emailed them!

My request was extended another 5 days, then I received a request to wait until after their vacation because staff would have to be called in to review the volume of emails.  I declined that request.  Next I received an email their lawyer claimed had the emails attached.  It didn’t.

Yesterday, after I reminded them I still didn’t have the emails, I received a 16 page PDF with a few emails repeated over and over.  See it here:  Standards Based Grading FOIA (resent Jan 06 20)

The emails mostly arranged meetings.  The best part if how Garnet Hillman signs her emails:

In my opinion Unit 5 was just stalling, there was no reason to delay those meaningless emails.  Hilarious.

According to some sources, Common Core has led to unprepared students for college.  Here is one article:  https://thefederalist.com/2019/10/31/first-common-core-high-school-grads-worst-prepared-for-college-in-15-years/

Is “Cleansing Grades” going to be any better?  Why aren’t teachers just allowed to teach?  Aren’t they best able to determine what their students need?

Years ago I taught 2 adult education classes in coordination with Lincoln Land Community College.   All I got was the book.  It was a lot of work and a lot of fun.  When a student understands it’s exhilarating.  If I had been told to waste time doing the “worksheet” I posted yesterday, I would have quit:  https://blnnews.com/2020/01/06/unit-5-teachers/

Yesterday’s story did prompt numerous copies of a petition signed by close to 100 teachers.  I’m told it is from NCHS but has been sent to every teacher in the District, the School Board, and Administration.

This is the petition: 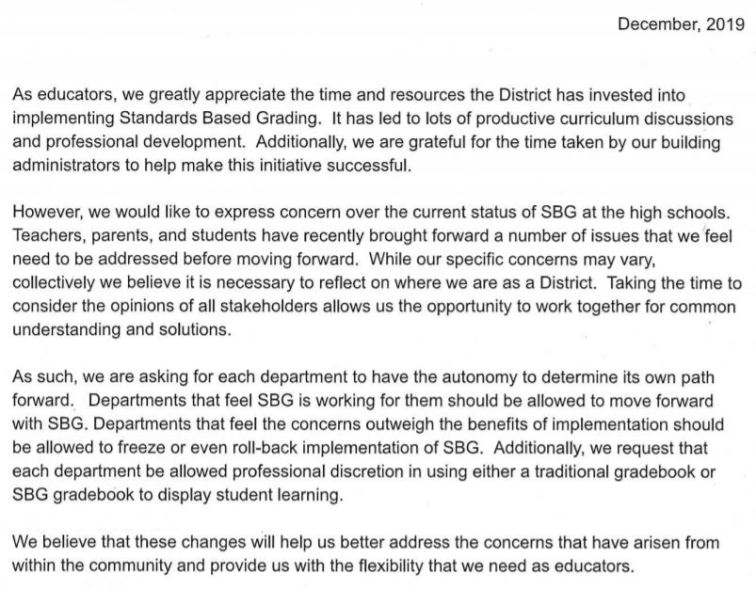 A note was included by one person who emailed me:

The teachers need parents to get involved.  Contact the School Board and Administration.

The next School Board meeting is January 15th.

See the Board members here:  https://www.unit5.org/site/Default.aspx?PageID=68

Your kids only get one chance at a good education.   Districts need to quit experimenting and just allow teachers to teach!