It could take a long time to report everything I received with a FOIA of emails between Stan Nord and Normal City Manager Pam Reece.  One thing obvious is she doesn’t approve of Stan looking at what she and the “professional staff” do.  Pam thinks Stan’s job is setting policy, not looking at day-to-day operations.

That’s funny because the “professional staff” prepares documents for the Council to rubber-stamp.  Mayor Koos thinks bills were already approved when the budget was passed and therefore don’t need to be discussed.  Where does the Council set policy?  With an already prepared budget to rubber-stamp?

Nothing proves your election representatives are immaterial more than this:

I bet NOTHING scares Pam Reece more than Marc Tiritilli becoming the next mayor!

It’s obvious the Board, appointed by the mayors, is doing the bidding of those mayors and paying no attention to citizens.  The mission of Connect is not to serve people who have no other choice in transportation, they want to force everyone to ride their huge buses.  They won’t give up on that goal and therefore the only hope for change is throwing out the mayors.

Start with this email from a citizen – the Town knew about the problems with the VA clinic in June and did nothing, two CT employees were copied on this email: 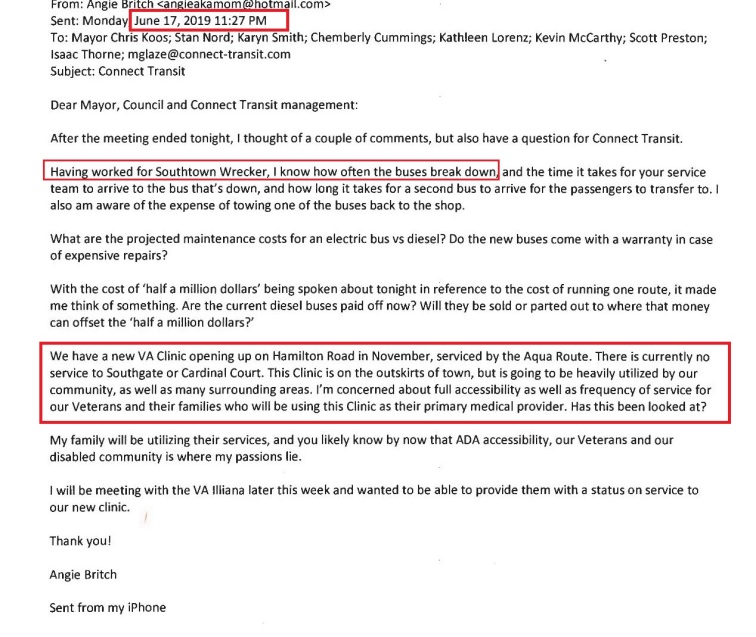 Stan Nord sent an email to Pam because various location were asking him why they don’t have a bus stop.  See the list in Pam’s reply – it’s all places that should be served.  Of course Pam jumps to tax increases: 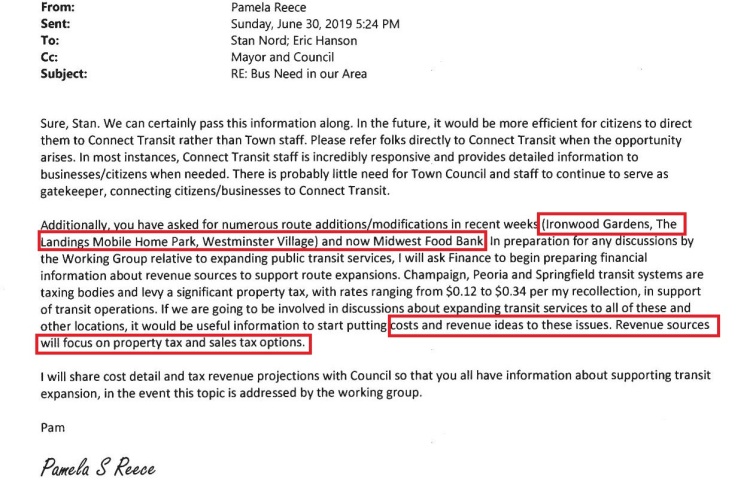 This was also a response from Pam about adding routes:

Connect Transit is not responsive to citizens, the Town of Normal steals your money to fund them, but your elected representative isn’t suppose to care.  Brilliant Pam.

In a much longer email Pam extols the great things Connect does and attempts to get Stan to be more positive.  “Best Practices” is code for sit-down-shut-up we know what we are doing.

Below is a complete discussion starting with an email from Stan to Pam.  Following is her response:

Pam is on the Connect Transit Board.  So is Bloomington’s City Manager Tim Gleason.  Pam thinks Stan should take concerns to Isaac Thorne, the General Manager of Connect Transit.  As of June 12th she was still clueless about citizens being ignored by Thorne and the Board.

They operate by “best practices”.

The “working group” is a joke as proven by Board Member Julie Hile’s son being included.

Sit down and Shut Up will only be replaced with For and By the People when voters elect people who believe that is what government is supposed to be.