WGLT did a story attacking Stan Nord using a letter City Manager Pam Reece sent to Stan Nord.  WGLT couldn’t possibly have obtained it by FOIA.  That letter was leaked to them, yes folks your government is either anti-business or willing to destroy anyone who isn’t a bobble-head on the Council.  (or both!)

One citizen, Doug Fansler, saw what was happening and tried to get answers.  I redacted Doug’s email address and phone number.

Next Doug emailed the Trustees leaving off Chris Koos and Pam Reece. 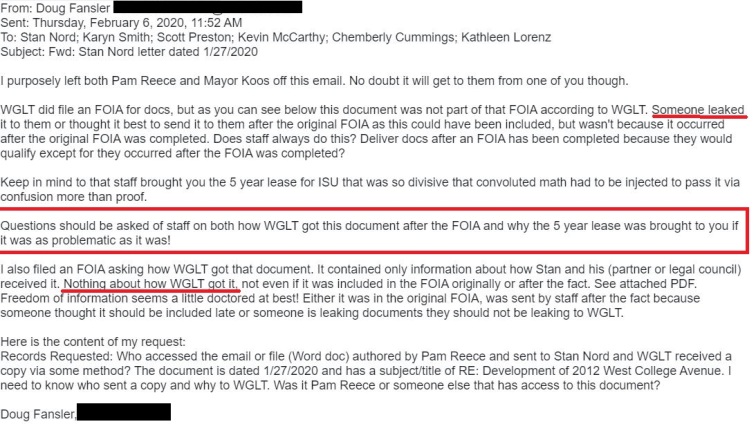 Kathleen Lorenz was the only Trustee to responded.  She seems oblivious to someone at the Town using WGLT for their purposes.  If you forgot, the WGLT story eventually states Stan Nord had been working with the Town, so there wasn’t a real story.  The title was meant for those who wouldn’t read down that far.

Doug asked Koos what was inaccurate:

Citizens of Normal need to clearly see WGLT is not an independent news source.  Are they are the “useful idiots” the Town of Normal uses when they need propaganda spewed?

9 thoughts on “Remember the letter leaked to WGLT about Stan?”